If it seems like I allude to movies and TV shows all of the time, it’s because I do. I think I’ve always taken what I see on the silver and small screens seriously. When you grow up with lots of delusions of grandeur but not-lots of human mentors, you look for something to fill a vacuum of leadership. I chose to seek out the best in the fictional characters I enjoyed in books, music, movies and television. There’s a lot of bad media out there, but there’s more good. People admire courage, integrity and conviction. I’m seeking good men to follow after and learn from, but I want to use this series of blogs to pay respects to the one’s who have taught me thus far.

When you hear me say that I want to be like Hey Arnold! when I grow up, I’m dead serious. That’s why I had to put him in the first installment. Below, I’ve listed a couple of lessons that I’ve tried to take from my football-headed role model.

1. Look Out For The Marginalized
I don’t think anyone would be surprised if the format for every Hey Arnold! episode was:
Act 1: Arnold Sees Someone Who Needs Help
Act 2: Arnold Tries To Help, But Something Goes Wrong
Act 3: Arnold Perseveres!

The reason why the characters are so rich in Hey Arnold! is because you watch as Arnold invests in each of their lives throughout the show. He takes a personal interest in everything he meets, human, animal or otherwise.

2. Listen
Everyone has a story. Stoop Kid has a reason he doesn’t leave his stoop. Pigeon Man has reasons he doesn’t hang around. Mr. Hyunh has an estranged daughter, and is a surprisingly wonderful country singer. There is a power to Arnold’s endless curiosity. Whether it has him chasing down a haunted train or exploring the underground world of the Sewer King in pursuit of Granpa’s watch, adventures spring from Arnold’s willingness to discover and listen. 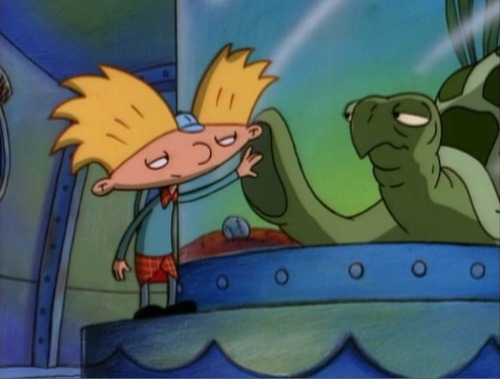 3. Be “That Guy.”
Obviously, this is a show about Arnold, so the episodes revolve around him. Still, you rarely see him shy away from the responsibility of being a citizen to the community. When he sees something that can be righted, he never puts his hands on his hips and declares that someone should do something about it. He doesn’t launch discussions about the system, he rolls up his sleeves and gets into it.

4. Hope
We have to believe that our actions can change the world around us. Arnold sees a vacant lot, and decides that a baseball field can be put there, so he sets forth to build one. Arnold is never dismayed by the idea that what SHOULD be done CANNOT be done.

All these. More. And jazz too.