Today the Knicks went back to Denver and got utterly spanked by the Nuggets. Melo went out with knee problems and Tyson Chandler went down with a “knee contusion” that for me, felt like this:

The Knicks’ playoff chances will come or go with Chandler’s health. He’s the foundation of the team and I don’t care how good ‘Melo or Stat might be, the Knicks don’t win a playoff series without Tyson Chandler. They don’t win the Atlantic Division either. Anyway, in other news, ‘Melo returns to Denver!

To an expected amount of boos. Let me tell you how this is similar and different than other recent All-Star exoduses. So how does ‘Melo stack up?

‘Melo might have complained about being in Denver a lot, but he sure got them some important pieces to build around. Without his fat contract, the Nuggets have also been able to accquire some other stars like Andre Iguodala. Denver can be mad at ‘Melo for leaving them or dissing their town, but they can’t say that he screwed over the franchise. Especially now that it’s obvious that Denver is a better team now without him.

The Dwightmare seemed to drag on forever as the Magic locker-room was constantly bombarded with questions about Dwight’s future. Stan Van Gundy lost a job but Hedo Turkoglu kept his. Despite the criticism, Orlando got a fair amount of value in exchange for Dwight, including future picks that we’ve yet to see. On top of that, they dropped Jason Richardson’s ugly contract. However, the Magic are clearly at a disadvantage without the NBA’s best center and have fallen far from the perennial playoff contender they once were. 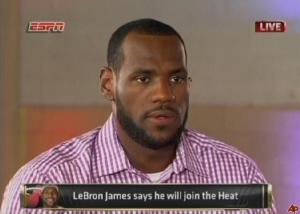 Of course The Decision is number one. This departure left the NBA with the most visceral reaction, because not only were jerseys burned in Cleveland, Lebron was booed in arenas all across the league for at least a year after the decision. He left his hometown team in a one-hour special that will live in infamy. In his defense, Cleveland management really did fail to put a winning team around Lebron. His absence took the Cav’s from the best record in the NBA to the worst, including a history streak of sucking. I remember when the Cav’s were like, “oh. Here’s Antawn Jamison. That will make it ok, right? Right?” He had his reasons for leaving, and he did raise a million dollars for kids, and he does seem like a genuinely good person, and he does have the best chance of catching Michael, but I think I’ll boo him for the rest of my life. When he won his first ring, I remember joking that now Lebron can go back to Cleveland and win one without the pressure. Now it looks like it could have a chance.

BTW: The pick used to acquire Kyrie Irving wasn’t even from Lebron’s trade. It was the Clipper’s pick that they traded for Baron Davis.

How Tom Brady Made Me Cry
by: sunroot liu

Yesterday, Brady went all-in, flashed his big-giant-balls, and demonstrated what it means to be a franchise player and a leader on and off the field.

This Monday, SI announced that Brady signed a contract extension that will likely be his last, one that has him wrapping up his Hall of Fame career with the Patriots. The contract is worth $27 million over three years. This significant pay cut opens up space for other big ticket players for the Patriots to sign.
I’ve been on both sides of the fence with Brady. On one hand, I hate him for being a little too perfect: the All-American quarterback with good looks and a supermodel wife. On the other hand, I love his story and how even after 3 rings, he still plays with a chip on his shoulder. But on Monday, this announcement made me a bigger Brady fan than I’ve ever been. Let me tell you why.

1. Early Signing
Before Monday, he had two years left on his contract, For the bulk of professional athletes, this means, “hey, we’ll talk in about 23 months.” Sports headlines are inundated with contract disputes and divas athletes holding their teams ransom for big contracts and preferred trade destinations (see: The Dwightmare on Figueroa St.).

Before any destructive rumors or unrest in the locker-room, Tom Brady made a deal. The Patriots could easily have become a team of guys who have to wonder about Brady’s future with the team and answer questions everyday with the media. Instead, they see that their leader is fully invested with their team and hopefully, they follow suit.

2. Pay Cut
The most striking aspect of this contract is the money. Despite loads of guarantees and bonuses, Tom Brady takes an unprecedented pay cut. For a Top-5 quarterback and arguably one of the best QB’s of all time, Brady takes a salary that may be worth half of what he could be earning. That’s right, half. 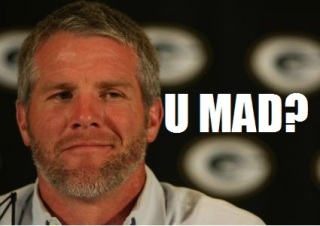 p.s. This pay cut likely gives New England the money needed to re-sign Wes Welker. How many friends do you know who would give up millions of dollars so you can them?

3. Trust
I didn’t grow up watching football. Football and I weren’t childhood friends. I met Football late in life, too late to have the blood allegiances that are born as a child fan. My loyalties were with players and stories. When I began to watch football, my first love was the Patriots. Besides having arguably the most exciting offense in the NFL, there was one stat said in passing during a game that tied me to this team forever.

The Pat’s are number one in the NFL for going for it on fourth down. Despite notoriously terrible failures (see: Pats @ Indy 11.15.09), Belichick continues to play a balls-to-the-wall, high-octane offense that I can only imagine hasdefensive coordinators around the league crapping their pants.

Then occasionally, when their scoring drives get stopped at 3rd down, Belichick says “screw it,” then turns to Tom Brady and says, “go get it.”

Belichick shows a trust in Brady that makes you wonder if Bill doesn’t remember the Ponytail or the Beiber or Uggs. He makes a statement to the world about Brady. This is my guy. (without a creepy tattoo, at that). It’s a level of trust that brings a tear to my eye.Brady returned that trust. He said to Belichick and Patriots management, I trust you to surround me with the right players.

4. “Just Win.”
Tom Brady’s answer to the critics? “Just Win.” Tom Brady posted these two words on his Facebook Monday night. A lot of players say they’d do anything to win, but when the money comes, they feel entitled to the big bucks that come with their talent. Tom Brady turned down money he had every right to claim and said “Just win.”