This evening, I sat down to eat my dinner quickly as Stephy fed a grumpy wee-baby-Shelby. Most days, the timing works out where she’ll swing on her baby seat while we eat hasty panicked mouthfuls before she grows impatient with the lack of attention. Today, we had no such serendipitous scheduling. I ate my way a little bit too quickly through a Post-Mates Pad Thai and settled down with a watered-down Thai Tea. And then, invariably, I revved up the engine on that old demon…Netflix.

I may or may not have spent my weekend watching some of the trashy mid-budget action flicks Netflix seems to be pushing out for the masses. Spenser Confidential didn’t know what movie it wanted to be. Triple Frontier felt like it had the potential to be good, but fell flat at the end. 6 Underground was unwatchable. This week, it felt like I needed something to cleanse the palate. So it was finally time for me to watch Season 6 of Bojack Horseman.

I enjoy Bojack Horseman. It reaches deep down and resonates with some of the best darkest places. It’s a show that shines a light on addiction, self-loathing and despite the prevalence of animals, it really highlights humanity. On top of that, Bojack from time to time tumbles into interminable tongue twisting tirades of titillating tête-à-tête. But this post isn’t really about the show.

This post isn’t really about the show because about two minutes into season 6, I sort of freaked out. I thought about AA meetings. In the midst of all of the confusion with COVID-19, I hadn’t thought about AA meetings. How are people going to meetings? For a lot of people, monthly, weekly, even daily meetings were and are the life-blood for a life of sobriety. A steady routine of accountability and catharsis, or at the very least, stale coffee and familiar faces was an essential tool to stem the tide of a personal darkness.

About a year ago, I went to a meeting in Orange. It was an assignment for my Pastoral Ministry class, but if I’m being honest, I’ve always wanted to go to an AA meeting. I didn’t know what to expect. I think I pictured a cold room with a circle of chairs and a lectern, people wearing khakis and work polos would share stories about hitting rock bottom. What it ended up being was warm. People were warm and friendly, but not pushy. 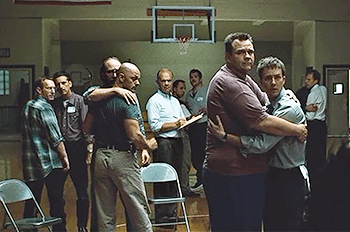 When I was waiting, I could see that a lot of people were there as part of their routine, or as part of a court-ordered mandate, so there wasn’t intensity in the room, just a kind of familial energy. It felt like people waiting for a pick-up basketball game to start.

Then, when we did start, people casually opened up and shared about what they’ve done and how they were doing. When I think back on it, I can’t remember the specifics of any of those stories, only how it felt to be in the room. The meeting itself seemed to have a liturgy, a routine that lends special power through repetition and consistency.

I saw people sharing about their lowest points. And after they finished, other people would smile at them and nod and clap. They accepted each other because they knew they were the same. Think about that. Think about the hardest truths you’ve never had the courage come to grips with about yourself. What would it mean if you voiced those out loud and had people not judge you. It felt like Sunday Nights at Winter Retreat. Sunday nights are testimony night where sleep deprivation takes hold of everyone and the walls come down. There’s a mighty power in this, a power that is sometimes just enough to keep us from tumbling back down into the pit.

I think about AA meetings amidst this crisis and I find myself praying. Super hard. For some reason it’s gnawing away at me.

You know, almost every day, I think about Thomas. Thomas is neck-deep in the muck of fighting this disease in the New York epicenter. My best-good-friend is a verifiable hero in a time where heroes are going to make the difference between a death toll in the thousands and one in the tens or hundreds of thousands. He’s trained his whole life for the skills and character to dutifully save lives without any fanfare and recognition.

He saves lives every day in an overworked New York Hospital and I #stayhome. So you can say we’re both doing our part.

Like everyone else in Quaran-Town, I’ve been glued to the news. Every day Stephy gives me some updated numbers and I can’t help but watch how COVID-19 ripples out into the world affecting industries and lives even outside of the health ramifications.

I don’t know if you think this way, but when there’s a crisis, I think about my role in it. This is because when you internalize something like the Amazing Spider-Man, you truly believe that you have a great responsibility to help. Now, I know I’m already a hero because I’m staying home and watching Netlix in my pajama bottoms (#stayhome), but for this whole crisis, I’ve had a sinking feeling that I’m on the bench for this one. I didn’t know my role in all this, and I began to suspect that I didn’t have one. But then Bojack, and addiction and a light bulb seemed to go off. It feels like this is a clue, a hint at my way to be a part of it.

I don’t know how to help. I wish I did. I’ve contacted Orange County AA. They’ve put me on a list of resources, but neither of us knows what that means. I’m reading as many articles as I can, including this excellent NY Times article. Maybe I can train some folks to use Zoom. Maybe I can donate some Pro accounts or some pizzas for meeting hosts. Maybe, quite possibly, I can offer an ear to anyone who might be reading this. If you’re isolated, or deep in a well, or living too much like you’re in a Bojack episode, I’ll be here for you as best as I can. I don’t know how to run an AA meeting, but I can sit, I can listen and I can accept and I can pray.