When I finally got to the cashier at Trader Joe’s, I asked, “do you think I should’ve bought more stuff?” She looked down at my purchase, three bundles of flowers and a small bag of lemons. “Umm, probably,” she chuckled, then asked “Was it worth it?”

I had just waited for about half an hour in a line that was one among many lines that stretched through the aisles and went all the way to the back of the store. People filled their carts with foods, non perishables, and whatever supplies they felt would help them as they prepared to hunker down for the next who-knows-when. I was just there to pick up some daisies, baby’s breath and lemons for the wee baby Shelby’s 100 day shindig. Yellow daisies and baby’s breath were gonna match the balloons and the lemons were for the ice water in the glass dispenser.

I stood in line with these items in one hand and with my other hand caught Pokemon and worked on the New York Times crossword. It took some time, enough to catch ‘em all, but not enough to finish the crossword. By the time I got to the cashier, my eyes were a bit fuzzy and my hands were a little sore, so it wasn’t unusual for the cashier to ask me if I thought the wait was worth it.
“Yeah.” I said, and I meant it.

That was last Friday. Later that day, Orange County schools would announce that they’d be shutting down. A few days later, the county would announce a prohibition on gatherings and businesses involved in non-essential activities. The lock-down had begun. 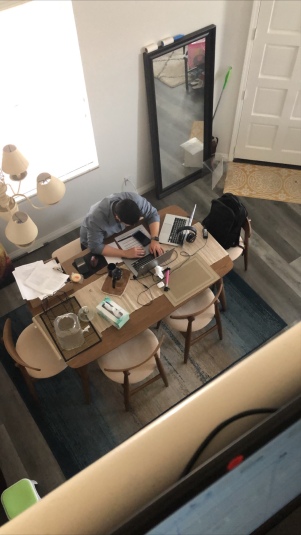 It’s been a lovely time working from home. Stephy has a set up with the big monitor up in the loft, and I’ve put together a two-laptop battle station on the dining table. We eat all of our meals together and perhaps most importantly, we spend lots of time with the wee baby. Well, mostly, the baby hangs out and falls asleep and poops and cries and smiles at us, God, we love her so much.

When I’ve taken out the trash, or retrieved things from the garage, I gotten a chance to look around outside. Maybe I’m thinking about it too much, but it feels different. This week, I see more parents walking or playing with their children. I hear more laughter from through our windows coming from the other homes in the complex.

This morning, I left our self-imposed quarantine to run a couple of errands. One of my tires is underinflated, so naturally I’ve ignored the warning light for the past two weeks. Stephy gently reminded me this morning to take care of it, so I promptly went to our local gas station and failed to reinflate it. Afterwards, I ventured to go see what Sprout’s looked like. I kind of expected what I’ve been seeing on the news, empty shelves, a line around the block and fist fights over Charmin Ultra. What I saw were families shopping contentedly for supplies, dutiful workers stocking shelves, and a relatively normal looking store.

It wasn’t mayhem. It was… normal. And maybe it’s because I’ve been binge-watching the West Wing (Sorkin Seasons only), which is basically patriotism-porn, but as I left the store and walked through the parking lot, I felt an immense sense of pride in my countrymen. We are indeed a resilient people. 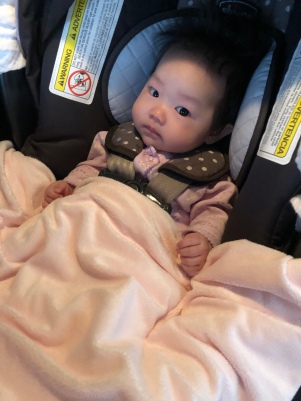 Later, we took the family out for a little drive. The baby likes to nap in the car seat, and Stephy wanted to see firsthand if I might be able to reinflate the tire with a second try (I was not). Everywhere we went, we saw families walking around in parks and while the restaurants and stores were empty, life continued to flourish despite our circumstances.

You can say that America was ill-prepared and naive to the gravity of the situation, but there is something admirable about the aura of invincibility with which we walk. You can call it hubris (and you ought to) but it’s lined with a confidence that comes from a long history of leadership and heroism. You can call those spring breakers idiots (and you ought to) but Americans are trained with an ethic where we don’t let circumstances dictate how and where we’d like to exercise our freedoms.

I read a passage once that, like all great pieces of writing, latched itself deeply, irrevocably onto some part of my soul. Steinbeck wrote that “I have always lived violently, drunk hugely, eaten too much or not at all, slept around the clock or missed two nights of sleeping, worked too hard and too long in glory, or slobbed for a time in utter laziness. I’ve lifted, pulled, chopped, climbed, made love with joy and taken my hangovers as a consequence, not as a punishment.” He writes so in response to his family who, upon discovering about his ailing health, discourages him from getting into his RV and driving around the country with his poodle, Charley. He won’t allow fear to stop him from what he wants to do.

I grew up in New York, where every bit of logic told us to fear large gatherings, avoid public transportation, and I don’t know, build smaller buildings. But we didn’t do that, we said “**** the people who would have us crawl in our holes in fear” and we built the tallest building in the western hemisphere, designed it like a middle finger and named it The Freedom Tower.

Our country is not composed and classy like other ones. We don’t sing opera from our balconies, or organize group dinners across an apartment complex. We sort of hoard toilet paper and beat up Asians. We’re a young country, but we’re full of heroes like the cashiers at the grocery stores, like the nurses and doctors, like the government workers, mailmen, restaurateurs and delivery guys.

And we also like the little things, like insisting on having a good time for spring break. We also laugh in the face of danger, like going for walks with our family because of course it would take an unprecedented worldwide health crisis to get us out of the house. We like to do what we like to do, even if it’s unwise, like buying flowers for your baby even when she doesn’t understand what they are and there’s a pandemic to be hoarding for. 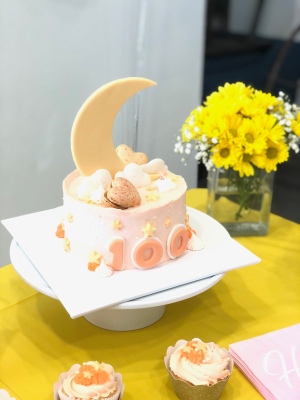