This week, the city of St. Anthony, Minnesota has awarded the family of Philando Castile $2.995 million in a settlement over his death during a tail-light traffic stop last summer. This comes on the heels of an acquittal of wrong-doing for Officer Jeronimo Yanez who was charged with second-degree manslaughter and endangering safety by discharging a firearm.

Without getting into the specifics of this case (or the many like it) and without diving into topics of racial bias, “routine traffic stops”, police militarization or any of a heap of issues, I wanted to hone in on one heartbreaking aspect of this case.

After the shooting, when Diamond Reynolds (Philando’s girlfriend) and her daughter Dae’Anna are in the squad car, Dae’Anna can be seen comforting her mother.saying “it’s OK, Mommy. I’m right here with you,” and imploring her mother to calm down. “Mom, please stop cussing and screaming ’cause I don’t want you to get shooted.” She also says, “I wish this town was safer.” The irony of this statement coming from the back of a police car should not be lost on the viewer.

Seeing this video challenged me to think about the relationship that we ought to have with the authorities in our lives. I have some of my own thoughts, but I wanted to do a little dive into what the Bible says. Here are some of my findings.

For Those Not In Authority

“Let every person be subject to the governing authorities. For there is no authority except from God, and those that exist have been instituted by God. 2 Therefore whoever resists the authorities resists what God has appointed, and those who resist will incur judgment. 3 For rulers are not a terror to good conduct, but to bad. Would you have no fear of the one who is in authority? Then do what is good, and you will receive his approval, 4 for he is God’s servant for your good. But if you do wrong, be afraid, for he does not bear the sword in vain. For he is the servant of God, an avenger who carries out God’s wrath on the wrongdoer. 5 Therefore one must be in subjection, not only to avoid God’s wrath but also for the sake of conscience. 6 For because of this you also pay taxes, for the authorities are ministers of God, attending to this very thing. 7 Pay to all what is owed to them: taxes to whom taxes are owed, revenue to whom revenue is owed, respect to whom respect is owed, honor to whom honor is owed.” – Romans 13:1-7

“Remind them to be submissive to rulers and authorities, to be obedient, to be ready for every good work, 2 to speak evil of no one, to avoid quarreling, to be gentle, and to show perfect courtesy toward all people.” – Titus 3:1-2

13 Be subject for the Lord’s sake to every human institution, whether it be to the emperor as supreme, 14 or to governors as sent by him to punish those who do evil and to praise those who do good. 15 For this is the will of God, that by doing good you should put to silence the ignorance of foolish people. 16 Live as people who are free, not using your freedom as a cover-up for evil, but living as servants of God. 17 Honor everyone. Love the brotherhood. Fear God. Honor the emperor. – 1 Peter 2:13-17

The Bible is pretty clear that the attitude of those who are not in authority should be that of respect and submission. I know that isn’t fun to hear, but respecting the authority of those above you is found all throughout the Bible. To answer your question: yes, this still applies when the authorities are unjust.

Before we assert our own rights, lets remember that Jesus himself submit himself to the Sanhedrin and the Roman authorities to be unjustly tried, crucified and killed. Did Jesus’ silence make him complicit in the unjust system around him? I’d argue that his character did more to cast a bright light on his captors than protest would have.

Am I saying never protest? No. But character is key. “For this is the will of God, that by doing good you should put to silence the ignorance of foolish people.” 1 Peter 2:15

“1 I urge, then, first of all, that petitions, prayers, intercession and thanksgiving be made for all people— 2 for kings and all those in authority, that we may live peaceful and quiet lives in all godliness and holiness. 3 This is good, and pleases God our Savior…” – 1 Timothy 2:1-3

Pray for those in authority. Beseech God on their behalf. Pray for their wisdom and discernment. Don’t let bitterness corrupt your ability to care for those who have the power to influence. Jesus compels us to love our enemies and pray for those who persecute us.

“But the LORD abides forever; He has established His throne for judgment, 8 And He will judge the world in righteousness; He will execute judgment for the peoples with equity.” – Psalm 9:7-8

“He upholds the cause of the oppressed and gives food to the hungry. The Lord sets prisoners free, the Lord gives sight to the blind,
the Lord lifts up those who are bowed down, the Lord loves the righteous. 9 The Lord watches over the foreigner and sustains the fatherless and the widow,but he frustrates the ways of the wicked. – Psalm 146:7-9

It’s important to have perspective and remember that God is just, and is the loudest advocate for the oppressed. God is in the business of righting the scales and no amount of circumstance should shake our belief and compromise our character. Remembering that God in the author of Justice should set our perspectives right and as Christians we ought to know that standing up for things is most effectively done on our knees before God.

For Those In Authority

This is kind of tricky because there aren’t lots of scripture that address law enforcement, but I’ve tried to look into principles that guide different authorities and leaders throughout scripture. I believe that they would apply to our police as well.

“Blessed are the peacemakers, for they shall be called sons of God.” – Matthew 5:9

“Greater love has no one than this, that someone lay down his life for his friends.” – John 15:13

The Bible is clear that those who would lay down their lives, particularly to protect others are blessed. Those who would bring justice to the weak and oppressed are worthy of our thanks and praise. They are agents of the love has called us all to, and they are blessed by God.

“Not many of you should become teachers, my fellow believers, because you know that we who teach will be judged more strictly. – James 3:1

“And masters, treat your slaves in the same way. Do not threaten them, since you know that he who is both their Master and yours is in heaven, and there is no favoritism with him. – Ephesians 6:9

“Now the overseer is to be above reproach, faithful to his wife, temperate, self-controlled, respectable, hospitable, able to teach, 3 not given to drunkenness, not violent but gentle, not quarrelsome, not a lover of money. 4 He must manage his own family well and see that his children obey him, and he must do so in a manner worthy of full respect. 1 Timothy 3:1-4

I believe that those in authority are called to a higher standard. There is nothing so crushing and disillusioning as an authority figure that does not adhere to the expectations that they themselves give out. Parents, politicians, educators and any form of authority figure lost credibility and trust whenever they implement a “do as I say, not as I do” policy.

The police are more intensely scrutinized because more is expected of them. The badge is meant to represent a bastion of character that speaks not only of the integrity of the one wearing it, but the security and protection of those around him/her.

Accountability should be a natural aspect of having power to ensure that it isn’t abused. There’s a price to pay with authority, and perhaps that price is receiving grace when you make a mistake.

My personal appeal to those in law enforcement is simple; please protect us. As you bravely do already, take risk upon your shoulders so that we don’t have to. Be the ones who run headfirst into danger because we cannot.

I know it is too much to ask for, but show patience when we don’t. When you’re scared, protect us before you protect yourself. When someone seems like a threat, be willing to take the consequences. Please be willing to be shot if it means you won’t shoot someone unjustly.

I’m asking that you don’t view this as a war, where it’s kill or be killed. You’re shepherds where some of the sheep are looking to commit terrible evils. I’m asking you to be trusting and brave when we don’t deserve it.

So What Can I Do?

If you’re looking at this complicated issue around Police Accountability and looking for some action to take, I would encourage a couple of things.

1. Get to Know/Appreciate a Police Officer
For many of us average joes, we can’t imagine the complexities of the job of a cop. To constantly be called into the darkest, most dangerous places and occasions of our society must be nerve-wrecking and terrifying. Get to know someone in law-enforcement. Listen to them. Appreciate them.

2. Look Into Accountability
There are many policies surrounding accountability, including not only the practice of Body-Worn Cameras(BWC) but their admissibility in court (it’s complicated).  Look into your local and regional policies and see where they’re at. I’ve attached an email I sent to my local Police Chief to ask about BodyCams and Bias Training. You can start as easy as that! 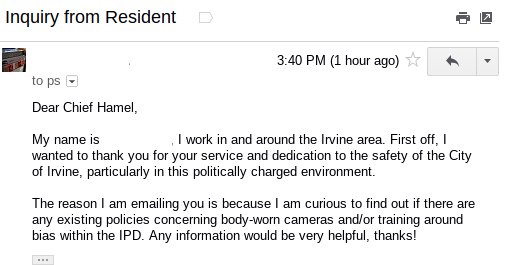